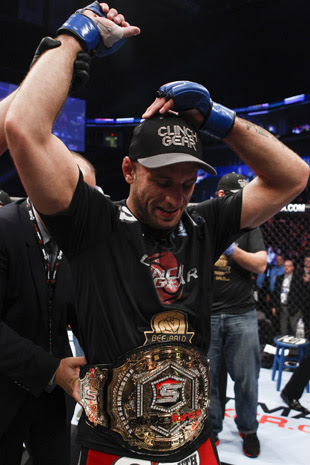 It's now all over for Strikeforce, the regional promotion that grew in size and strength to be a player for a few years in MMA. In their final show, the fighters rose to the occasion to give a memorable final impression. Which ones really stood out?

No. 1 star -- Tarec Saffiedine: Heading into the Strikeforce welterweight championship bout with Nate Marquardt, most of the discussion was about Marquardt's return to the UFC. It was just assumed he would keep the belt, but Saffiedine had other plans. Using a smart game plan filled with punishing leg kicks, Saffiedine picked apart Marquardt on the way to a five-round decision. It will be fun to see what he can do against UFC welterweights.

No. 2 star -- Ronaldo "Jacare" Souza: Ed Herman threw an illegal upkick at Jacare. The referee inexplicably stood them up to restart after the kick. Even with all that, Jacare still managed the smoothest submission of the new year of MMA. With such a great grappling game, Souza should have plenty of interesting match-ups in the UFC.

No. 3 star (tie) -- K.J Noons and Ryan Couture: During the preliminary card, Noons and Couture fought out a bloody battle that was the best of the night. Though it appeared Noons had the upper hand, the judges called the fight in Couture's favor. But the good news for both fighters is that they won their bout in a way to all but ensure their spots in the UFC.

How Are We Doing?

Every year at CES, the focus on autos and the tech they're outfitted with grabs a fair share of the attention in Las Vegas. This installment was no different. While several companies trotted out their latest infotainment wares, the self-driving debate nabbed a prime spot as Toyota and Audi both offered show-and-tells on tech that looks to aid drivers rather than do all of the work for them. As we've come to expect, a wealth of infotainment systems were also on display with a couple in particular grabbing our attention. Not to be overlooked, devs received a number of notable invites to create system-specific offerings this time out. For a full rundown of the highlights, read on past the break for a brief synopsis.

While we're no closer to having a car that will drive you to the market on its own, some "self-driving" tech was on display, offering a glimpse into what the future may hold. Audi's self-parking car and piloted-driving demo showed off tech designed to lend a hand when finding a spot in the garage and navigating through rush hour -- two things we'd gladly welcome some help with. For now, both operate at very low speeds for carrying out these two very specific tasks. Toyota outfitted a Lexus with research tools to look into autonomous driving, meaning a real-life human will still need to pilot the ship. It appears that the immediate future will focus on intervening in the event of driver error rather than sporting full-on autopilot. One thing is quite apparent, though: the general public and legislators aren't too eager for widespread adoption of self-driving whips.

Both of the American auto giants announced plans to begin developer programs in order to beef up the in-car experience for drivers. Ford is looking to expand its modest lineup of SYNC AppLink software by offering the requisite APIs largely for smartphone apps. GM is going the in-car route, inviting devs to the MyLink SDK and a portal for all the essential info. In theory, these will be available for users to download straight from a vehicle's infotainment system.

How do you make a $300,000 car even more amazing? You rip out all of the dash-mounted electronics and install three screens, video conferencing, ultra HD sound and a 3D backup camera. That's just what QNX mustered up in order to show off its recently announced Car Platform 2.0. Visually, the system consists of three displays: a center-mounted, 17-inch curved panel and two high-res screens on the driver-side dash. The latter offers a glasses-free 3D view via that rear-mounted camera and the LTE-powered conference calling only works while you're safely in park. For us, the most impressive part was the sound system. The tech touts crystal-clear audio for those calls and tunes, directing sound waves at the driver or passenger depending on who is being spoken to.

Infotainment systems are announced on the regular, especially here at CES, but Garmin's latest made us take notice. The K2 "glass cockpit" takes the latest in avionics panels and brings it to consumer vehicles. Here, a 10-inch center display powers the infotainment bit while a 12-inch unit is situated behind the steering wheel for supplemental info and gauges. A dual-core ARM Cortex-A15 processor does the heavy lifting for 3D navigation and there's a wealth of real-time info and Bluetooth connectivity for handling media duties. All of that data is sourced from a connected smartphone or modem -- should OEMs include it -- for accessing Garmin's servers. Of course, it's up to companies whether or not that center display will be disabled while the car is in motion.

If you're looking to get more out of your current ride, a gadget / software duo that Delphi and Verizon have teamed up on will do just that. A diminutive unit plugs into a vehicle's OBD-II port (standard on all rides since 1996) and works with a smartphone and tablet app to send location info and vehicle data to your hand-held gadget. Geo-fences, key fob functions and remote start are also packaged in. The Vehicle Diagnostics system and Connected Car service are set to arrive on iOS and Android devices with a web-based version in tow.